Knowing me knowing Stockholm; Ah Ha! Knowing me, knowing Stockholm! Or that’s what we thought – we know this place, returning here for our third time will be such a rewarding END_OF_DOCUMENT_TOKEN_TO_BE_REPLACED

#OneImageOneDayOneLife You will never go to a more amazing place than Lapland I decided to spruce up my previous blog with some more images from this memorable trip, so this END_OF_DOCUMENT_TOKEN_TO_BE_REPLACED

You will never go to a more amazing place than Lapland

I decided to spruce up my previous blog with some more images from this memorable trip, so this post is all about Kaaresuvanto, Finland (Lapland) one of the most beautiful places you will ever visit. So before I knew it, I had added sixty eight images to be exact; I will now add some words to go with them!

acording to wikipedia.... Kaaresuvanto (Northern Sami: Gárasavvon, Swedish: Karesuando) is a village in the Enontekiö municipality of the Lapland region in northern Finland, located on the Muonio River, which follows Finland's western border with Sweden. The village of Karesuando (part of Kiruna municipality) is located on the Swedish side of the river. According to Finnish tradition the two are considered parts of the same locality (with a population of about 470), although officially a national border bisects them. The sides are linked by a road bridge built in 1980. The area is traditionally Finnish and Sami speaking. After the Finnish War in 1809, the border was re-drawn for political reasons, not because of any cultural or linguistic reasons existing at that time. Later a cultural and language difference grew because of school and church influence. The village got its first buildings in 1670, when Måns Mårtensson Karesuando, called "Hyvä Maunu Martinpoika" in Finnish and "Good Maunu, Son of Martti" in English, bought land from Sami Henrik Nilsson Nikkas. The vicar and botanist Lars Levi Laestadius worked in Kaaresuvanto where he founded the Laestadian revival movement named after him. In 1944 the area was burnt down by German troops during the Lapland War and had to be rebuilt. Swedish Karesuando is the northernmost point on the major European route E45 to Gela in Italy, and Finnish Kaaresuvanto is a stop on European route E8 from Tromsø to Turku. 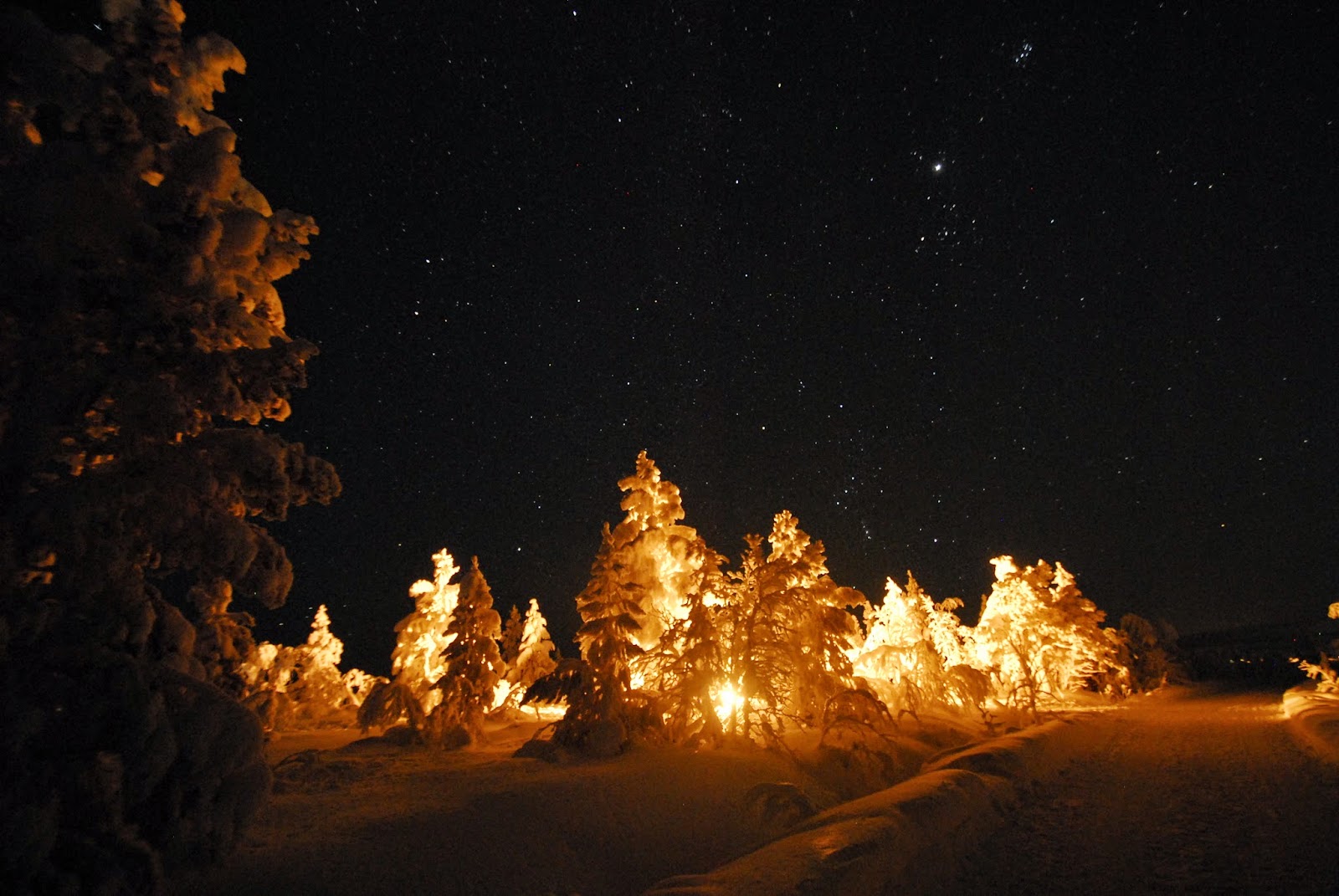 Even if you don't track those funny lights down..........
just lay back in the snow, in your suit, and look up at the stars
we are just a speck on this earth